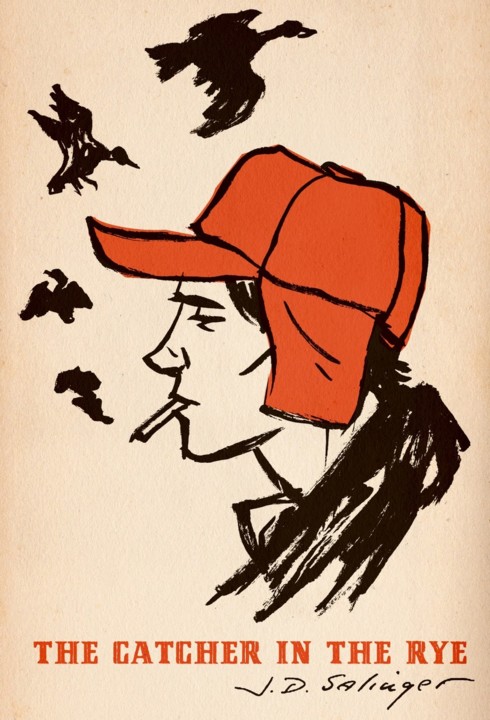 The Catcher in the Rye stands as one of my favourite books ever, due to the mark it left on me while I was growing up, in my teen years. I shall be forever thankful to the Portuguese teacher who recommended said book to me. While admittedly, it probably will not have such an impact on an older reader, I still wholeheartedly believe that the book can be a fond trip to the past for him or her.

The Catcher in the Rye is a coming of age book, we’ve all lived some of the things the protagonist, Holden Caulfield, goes through and we’ve all felt some of the emotions that he experiences. I could write at great length about the book and its scenes, the things it tries to convey, the points it tries to make, but, I find it way more satisfying to present you with one of, if not, my favourite scenes.

It takes us to a dialog between Holden and his “friend” Stradlater. Notice that I chose to use quotation marks around this word, because they aren’t exactly friends, perhaps not even at all: Stradlater is Holden’s roommate at his prep school and they spend a lot of time together, but that’s about it.

Now, Stradlater is discussing his date for the night, with this girl, and Holden knows he’s quite the womanizer – not really in a romantically redeeming way; we learn in the book that the two boys have double dated, and during that date, Stradlater keeps pressing his advances on his date, who keeps saying no, until, well, she doesn’t and they hook up (something that today would, and understandably so, generate a lot of controversy.)

Moving on, Holden is quite uninterested about the whole ordeal, until he learns that the girl Stradlater is seeing is Jane, his childhood friend. This event represents a complete “180” for Holden: he becomes really invested in the situation.

This is because Jane is someone very special to him - although they never dated and Holden never directly mentions it, you can see in the way he talks about her, that he cares deeply for her, in a clearly platonic interest I’d say. Take for example, the way he recalls her habit of keeping her kings on the back of the board in a checkers game, just because she wants to keep them safe – this is a memory and a girl which Holden is very fond of.

He keeps asking questions about Jane, to the point that he annoys Stradlater so much, that he tells Holden to just go talk to Jane himself, revealing that she is downstairs. Holden becomes even more upset, hesitant and unsure on whether to go see her or not. It had been a while since they had seen each other. Ultimately, he decides not to – he also fails to give her a call for the remainder of the story for fear of a lack of words, despite wishing to do so.

Before Stradlater leaves, Holden makes him promise that he will ask Jane if she still keeps all her kings in the back row, much to the confusion and disinterest of Stradlater.

During all of this, Holden is suffering with the idea that Stradlater will not appreciate and understand Jane, to him, she will just be another girl like the one in the car. This leaves Holden agonizing while Stradlater is gone, unable to distract himself, and makes him break out into a fight with his roommate, once he returns from his date and refuses to give him any details.

This was, to my young and developing self, a picture perfect portrayal of what some crushes and romances were like, and in that sense, provided me the understanding and comfort we all seek at that age – at a time where we all believe to be Holdens but never Stradlaters (which is quite ironic, because Holden probably, also, underappreciates and womanizes his share, namely the other significant girl interest in the book).

Not to say that the book fully loses its touch with an older demographic, we may all still be unable, at times, to go down stairs and meet our Jane's or to find the right words – and hopefully so, if we wish to still be young at heart.

Anyway, back to the main motif: this is why I believe you should read it…

However, if scenes like this fail to captivate you in any sense, then, well, perhaps the Catcher in the Rye may not have been the book for you, then or now.